Transporting The Marching Force to a once-in-a-lifetime performance 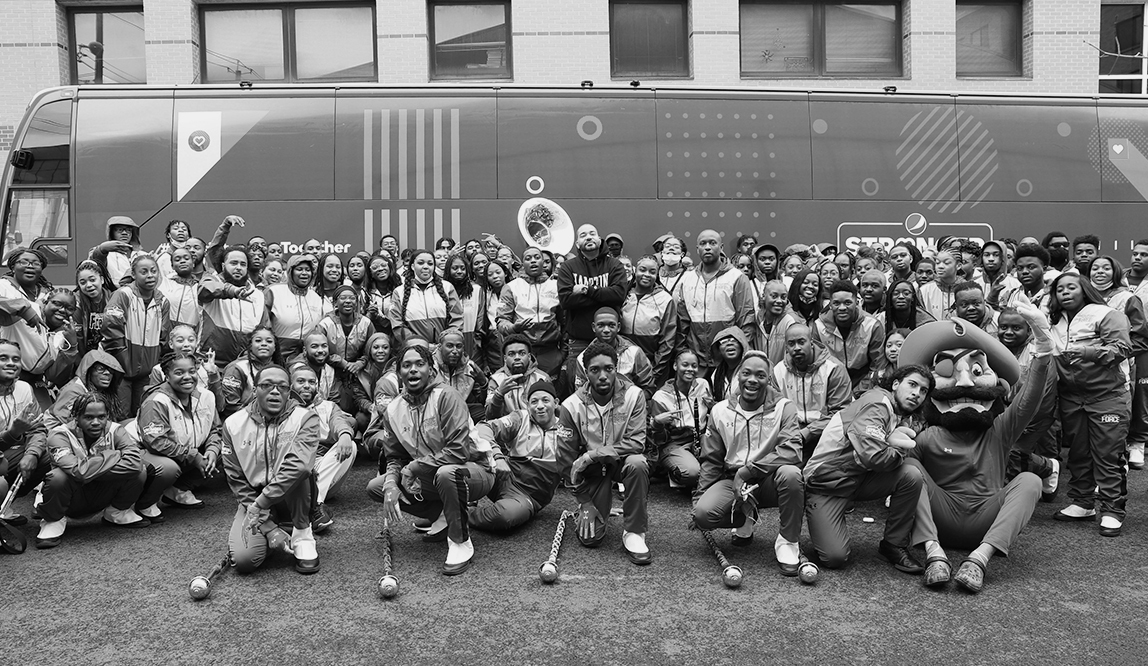 “To be able to perform in the Macy’s (Thanksgiving) Day Parade is a once-in-a-lifetime opportunity,” said Victoria Boyd, an ebony fire dancer and strategic communications major. “I am so grateful that I was granted the opportunity to not only be in the parade, but (to) be in it doing something that I love.”

She and her nearly 200 bandmates had been preparing off and on for the past two years. They learned they were selected to participate in 2019, but the pandemic pushed the performance back a year. By the time they were ready to go, they were equipped with more than two years of practice – in addition to a $100K donation from Pepsi Stronger Together to cover transportation costs and uniform purchases.

“This donation came at just the right time, as we were struggling to raise funds for apparel and travel costs,” said Dr. Thomas Jones, director of bands at Hampton University. “If it wasn't for Pepsi's donation, we might not have been able to make the Macy's trip a reality. The students were excited to receive their apparel, and that excitement actually translated into a better performance.”

The meaning of The Marching Force

Jones has been working tirelessly to grow the band to its current size. It was just a small group of 60 students when he became the band director in 2017. But it’s name always carried the same meaning – a force to be reckoned with.

“We take students from all walks of life,” he said. “A lot of bands will have an audition process where they make cuts, but our biggest thing is that we want them to be trainable and coachable and come in with the right attitude. Because of that mentality, we've been able to target students who otherwise might not have ended up in college or in a collegiate band.”

Getting recruited to The Marching Force has changed students’ lives.

“When I had nothing, no parents, no money, no one looking after me, band saved me and gave me a future,” said Jeremiah Encarnacion, assistant drum major and a history major. “It showed me how to pursue a better quality of life for myself and a better quality of character for the people around me.”

Jones has taken the band far. His students have performed at the 2018 and 2020 Battle of the Bands, the drumline's performance in the 2019 Tournament of the Roses parade and the 2020 New Year's Eve celebration in Rome, Italy.

But the trip to New York City was still an exciting first. And Pepsi Stronger Together’s support helped boost morale.

“It sends the message that our students are indeed important and that they matter,” he said. “Each student has a story to tell, and through the opportunities presented by Pepsi, those students are empowered to know that their stories are worth telling.”

The lasting effect of the performance

It’s not every day that millions of people see The Marching Force perform live.

“We hope that the increased publicity will help to boost recruitment and brand awareness for all of Hampton University,” Jones said. “However, our challenge remains an uphill battle. We struggle to raise funds for instruments, uniforms, and scholarships, so we are hoping that the band's performance can create a long-term impact that positively affects those areas as well.”